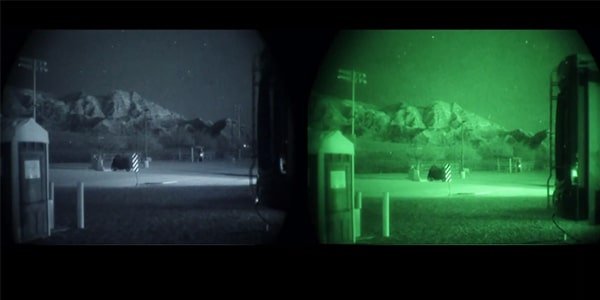 Are you faced with the challenge of choosing between the white phosphor and green night vision? Do you need an answer to the query: why is night vision green? Discover the similarities and differences are between the two image intensification options.

Most people who are used to Hollywood and Bollywood movies do not need to be introduced to the concept of night vision. Yes, we are aware of this technology when used by the military to snuff out enemies from dingy bunkers. Night vision is the ability to see in extremely low light conditions. Human beings, unlike animals, lack the capacity for seeing properly in low light environments. As such, they rely on night vision devices to bridge this gap. Initially, it was exclusive to the military, but night vision technology has been made accessible to a few other specialized sectors. For instance, hunters are given access to night vision.

Technologically advanced night vision can be categorized into active illumination, image intensification, and thermal imaging. The question of whether white phosphor is a more preferable choice than green or vice versa comes under the image intensification category. In essence, both white and green phosphors allow images in low light conditions to be amplified just so we can see them. Although newer night vision technologies are being developed, the green and white phosphors remain the most commonly used. Just as they seem similar, they also have certain differences.

The similarities and differences

The first thing of note regarding the similarities of green and white phosphors is that both are night vision enhancers. They could be built-in devices that can be attached to sniper rifles and similar arms. They are also built-in goggles and binoculars.

Another thing to point out about the two in terms of similarities is that both work with dim light. In other words, they do not work at all where there is total darkness. Therefore, in environments such as dark bunkers, tunnels, basements, and blacked-out buildings, neither green or white phosphor will work. However, thermal night vision detectors are good alternatives in total darkness.

Irrespective of that, one should point out that both white and green phosphor work just fine. As long as there is some dim light, however low, in an environment, the green night vision will do well. The same thing can be said of white phosphor. Nevertheless, as expected, the white phosphor is a more recent technology, and as such, has slight advantages over green.

For example, when it comes to getting better results in fight situations or warfare, white phosphor gets a trophy. But if it is just about seeing images in low light environments, then the green night vision should suffice. This is not to say that green phosphor is still not being used by the military. However, it is being phased out because of the tactical edge of white phosphor and thermal devices.

Another interesting consequence of that is that there is less strain to the eyes when using white phosphor night vision. If you are going to be using it for a long stretch of hours, white is a lot more preferable option. This is because it has been proven to cooperate better with human eyes.

Furthermore, white phosphor night vision is certainly more expensive than the green one. Great quality white phosphor could cost as much as $900 to $1,500 whereas, green night-vision goggles goes for as low as $350. Therefore, there may not be any reason to splash so much on the former when you can get green for a lot less.

To conclude, some experts have argued that there is not much difference between the two options for image intensification. For them, it all boils down to the preferences of the users. For instance, the military seems to prefer white phosphor because of tactical reasons. At this point, the comparison should be between image intensification and thermal imaging.

There is always the question: why is night vision green? This is because the photo screens are made of phosphors, which makes the images come out as green. By implication, the white version produces whitish outcomes because the screen is made of white phosphor. But is there anything such as colorized night vision?

As we are all aware, technology keeps advancing every day. And when it comes to the military, there is always the need for tactical superiority. The more accurate night vision devices produce, the better. As a consequence, there is colorized night vision but it is commonly used for videography and photography.

ColorTAC can also be attached to night vision devices. This will help to bring about some colors in the results of the images. Nevertheless, colorized night vision also requires low light. So, complete darkness will always be a limitation as well.

“spinoutdoor.com is a participant in the Amazon Services LLC Associates Program, an affiliate advertising program designed to provide a means for sites to earn advertising fees by advertising and linking to amazon.com.”